Before we introduce our Beer Steins to you, let’s have a quick sneak-peek into the Origin of Beer Steins. The word has been originated from the German word “Steinzeugkrug”, which basically means stoneware jug or a tankard. In other words, Beer Stein is an English term for traditional beer mugs made out of stoneware, or in specific, ornamental beer mugs that are sold as souvenirs or collectibles. Such steins are popularly known to be made out of stoneware, pewter, porcelain or even silver, wood or crystal glass. They may even have hinged pewter lids on the top with a thumb lever. Steins usually come in sizes of half liter or a full liter. Similar to tankards, they are usually decorated in a nostalgic manner along with allusions to Germany.

Some Facts about Beer Steins…

The hinged lid is believed to have been implemented during the age of the Black Plague, a measure taken to prevent diseased flies from getting inside the beer. While people still do believe that Black Death was a result of a spread by fleas and contemporaries thought it was a spread through poisonous air. In the later half of the 19th Century, stein makers found different benefits with different materials, such as the benefit of using stoneware to make steins was that moulds could be used to mass-produce elaborately carved steins. With glass, one could produce multiple glass mugs as well as add an artistic touch to it by including acid etchings, glass staining or even multicolored overlays. Production of Beer Steins was substantial in America, but it’s largest producer is Ceremarte of Brazil. And the most traditional area of beer stein production in the Westerwald region in Germany. On the 21st of September 2014, Oliver Strumpfel broke the record for most beer steins carried over for 40 meters(130ft) without spilling, managing 25 steins.

Fact or fiction, who's to say? But fun conversation none the less. Term, "Saved by the bell", some believe that back in the 17th century when lead was used to make very cheap beer tankards which the town drunks would consume their brew from. 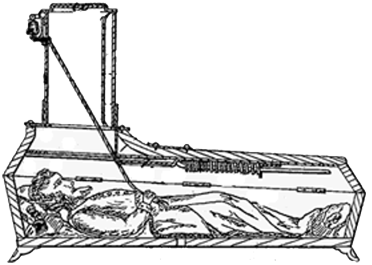 Often times resulting in lead poisoning causing the person to fall unconscious. Presumed dead by the town officials the unconscious were given a burial. A time came when there was a shortage of wood to make coffins so they began digging up past burials to reuse coffins. It was then they discovered disturbances in the coffins that indicated they had been burring people alive.

To correct this problem a bell was rigged with a string then tied to the person's hand, so if the buried was to wake and move, the bell would ring ...hence "Saved By The Bell". Now it was needed for someone to be on watch around the clock or.. umm "Grave Yard Shift"...

You're at your favorite pub or bar, tired from the day's hectic work and it's hassles and all you want is just one thing, a beer. A chilled one. 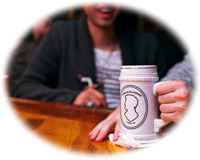 You ask for a beer at the counter and it's served to you. You watch it as the dew starts forming on the outside of the mug. Gradually, it begins trickling down the glass.

You reach your hand towards it with quiet anticipation. You begin to salivate, but you can't wait until that cold blissful beer touches your tongue. The mug finally touches your tongue and the golden drink finally cascades down your throat. Ahh, refreshing!

Although, have you ever thought of the container that acted as the nectar of life? Popularly and commonly known as mug, glass, stein, tankard. It might sound unbelievable, but there's some or little science and a major amount of art involved in the designs to ensure that the blast of nourishment tickles your palate in just the right way.

And as we quote, "You gotta tickle the eyes before you tickle the tongue"

In recent times, Steins have to be come to known as any beer container irrespective of its size. Our custom printed Steins would be more technically appropriate if they were known as Personalized Tankers instead, since it’s known to most that traditionally steins would have a hinged lid. Albeit, since our Steins are devoid of hinged lids, they are better known as Beer Tankards.

Now, you might be thinking that this would turn out to be disadvantageous for our business. Apparently it wasn't! Since we foster uniqueness in others' as well as our own minds, we decided to use some creativity. Since we didn't have Hinged lids to cover our Beer Tankards, we introduced our Beer Mats. Back in the 17th centery or earlier when it was thought of to use beer mats, rather than under the mugs they decided to use them to cover the top. A viable replacement of hinged lids. However, the Beer Mats served the same purpose for the tankers as the hinged lids did to the Beer Steins, which was to keep the bugs and other foreign objects from falling into your beer.

Our custom printed Personalized Beer Steins and Tankards are quite popular among a variety of Pubs and Taverns who have their own Mug Clubs". 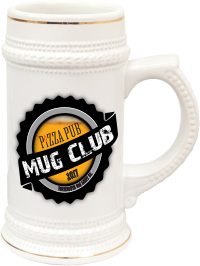 Apparently, some Pubs have invested in our Beer Tankards. They print their logo/brand on one side and offer the customer the choice to purchase the personalized ones. One of the Taverns have printed their logo on one side and the option of having a custom personalized print on the other side, for their customers.This way they proceeded with providing two print options. One of the prices demanded that the Steins would remain in the Tavern itself for the customer to be used whenever it was required. This boosted the Tavern's customer loyalty. The second price option let the customer take the Beer Stein home to show off to all of their friends.

Motivated by their strategies? Feel free to drop in your ideas on how you could use our Beer Steins to your benefit and to boost your customer loyalty. We are flexible and will create a custom offer just to suit your needs.

A Personalized Photo Beer Stein is an amazing item to gift someone. We are here to assist you and assemble your ideas, even in textual format. That's what we are here for! To help you get what you want and to see you happy! It doesn't matter if you're not a Graphic wiz or a Graphic GURU. All we need is your permission to lend us your imagination regarding our product and allow us to implement it and print it for you. And the best part is, we offer this service, within reason, at no extra cost! So feel free to hit us up on our email.

A little bit about our dye sublimation printing...

Unlike other print technology such as traditional screen printing, which lays the inks on the outer surface;  these mugs are printed using our unique dye-sublimation process which actually embeds your personal message, logo or photo into the surface of the ceramic stein. Our dye-sublimation prints will not fade, crack or peal. We guarantee it! If any or our steins ever fade or distort with normal use, simply return it and we will replace it free of charge.

We can produce a single custom stein for gift or other keepsake or we can produce hundreds beer steins for that special event. We can also personalize beer steins in a volume order (print a different name on each beer mug). Custom printed to order with your image and/or text. No minimums to order.

Got an idea for a custom print but not sure how to create it? No worries, please contact us and we will help you for little to no extra cost (usually no cost)